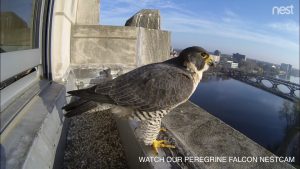 Our Nest Cam is focused on Rockford’s only known pair of breeding peregrine falcons. The Nest Cam was purchased and installed in April 2018 by the Sinnissippi Audubon Society in partnership with the Rockford Register Star. The historic news tower was sold the beginning of 2022 to Iconic Energy. We’re excited to partner with this green energy organization going forward to ensure the community can continue to observe these birds!

Female peregrine falcon Louise hatched in Toronto’s Canada Square site in Ontario, Canada, where she was banded in 2016. She was spotted in Malta, Illinois, and Jefferson County, Wisconsin, before moving on to Rockford. Her band is black with S/56. She first arrived with yellow tape over a silver band on her right leg, but that has since worn off and it is just a silver band now.

Louise has had three mates and her current mate is Brian (Blk/blu, 62/S), who arrived on February 16, 2021. He hatched in Columbia County, Wisconsin. Previous mates include Lil’ Kool (Blk/red, P/54), who hatched in 2015 at Thilmany Mill in Kaukauna, Wisconsin. And her first male, Gigi (Blk/blu, 00/N), who arrived in 2018 with Louise. Both may have died, been driven off, or simply relocated with another mate.

Peaches, who was part of the 2019 clutch, was found dead at Ohio State University stadium in May of 2022. It is thought that she did not survive an encounter with a pair of resident peregrine falcons.

Jane, who hatched and fledged in 2022, was found dead at the Rockford Airport in August of 2022.

The whereabouts of the others is unknown at this time, but updates will be posted as they are available.

The Nest Location in Downtown Rockford

In 1930, the famous architect Jesse Barloga designed the Rockford Register News Tower at 99 East State St., which is listed on the National Register of Historic Places. It was built as an homage to the Tribune Tower in Chicago. Originally planned as an eight-story plant and 13-story tower, it was downsized due to the Stock Market Crash. At the top of the tower, the “Lantern of Liberty” symbolizes the importance of free press as part of our Constitutional rights.

Louise choses to lay her eggs in a drainage channel on the building’s exterior on the eighth floor. Nest sites in the wild usually are on cliff ledges. In urban areas, they often use building ledges or even bridges. No actual nest is built with twigs or sticks, but the eggs are laid in a simple scrape. The scrape is a small depression made in the pea gravel or ground material by pushing their feet backward to dig out a little low area.

The peregrine falcon, also known as the peregrine, and historically as the duck hawk in North America, is a widespread bird of prey in the family Falconidae. A large, crow-sized falcon, it has a blue-grey back, barred white underparts, and a black head. As is typical of bird-eating raptors, with females being considerably larger than males. The peregrine is renowned for its speed, reaching over 200 mph during its characteristic hunting stoop (high speed dive), making it the fastest member of the animal kingdom.

The bird of prey’s population was wiped out in Illinois by the 1950s and 1960s, due in part to the widespread use of pesticides like DDT. These chemicals caused egg shells to thin, resulting in breakage, as well as abnormal reproductive behavior in adult birds. Throughout North America at that time, peregrine falcons were close to extinction.

The birds were placed on the federal and Illinois endangered species lists in 1973, according to the Chicago Peregrine Program. The program launched in 1985, and released 46 birds into the wild between 1986 and 1990, according to The Field Museum. By 1988, there was believed to be only one breeding pair, in Chicago. Currently, there are at least 30 breeding pairs.

It was in 2015 that peregrine falcons were removed from Illinois’ List of Endangered and Threatened Species. The peregrine population now is a threatened species under the Migratory Bird Treaty Act.

The Nest Cam is not working, who should I contact?

If you find that the Nest Cam has frozen please try refreshing the page first and check your internet connection. There can be problems watching the Nest Cam when using Internet Explorer, please try a different browser if you are having difficulties loading the Nest Cam. Please contact info@sinnissippiaudubon.org if there appears to be something wrong with the Nest Cam and we will work to get things restored.

How many eggs are laid per year?

The eggs aren’t being incubated, are they alright?

Incubation doesn’t really begin until all the eggs are laid. This means that all chicks hatch at a similar time, reducing the differences in size. Once the last egg is laid both parents share the incubation.

How long before the eggs hatch?

Incubation starts once the last egg is laid and lasts for around 29-32 days. Both the male and female share the incubation.

I can’t see the chicks on camera, are they alright?

How old are the chicks when they fledge?

The chicks usually fledge 35-42 days after hatching, it will then be another few months until they are independent of their parents.

How will the fledged chicks learn to hunt, and when will they leave the parents?

Louise is an experienced parent and will withhold food items and encourage them to take longer flights. At this time, both adults will drop prey in mid-air for them to catch in a food pass – this activity contributes to bringing about the day when they will become independent. The loosening of ties with the parents is gradual and spread over several weeks, during which time they gradually learn to fend for themselves. The adults will continue to feed them until they disperse naturally.

There seems to be one chick that doesn’t get fed adequately. Why is this, and can you help?

It is likely that this will be the chick that hatched last, and because of this it will be a couple of days behind its siblings. Louise is an experiences parent and has a fantastic track record of raising healthy broods. However if the conditions are difficult both parents will focus their efforts on the largest, healthiest chicks most likely to survive. We are not able to interfere as peregrine falcons are protected under the Migratory Bird Treaty Act and disturbing them is a criminal offence. Read more about this here.

Although to us some aspects of raising a peregrine family may seem cruel it is important to remember that these are wild birds and they are simply acting naturally.