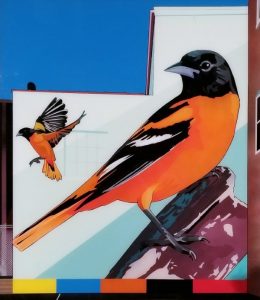 The Audubon Mural Project – Rockford is a public art project featuring birds that have identified by the National Audubon’s birds and climate change report.  According to that report, climate change will impact 389 species of birds by 2080, including the Baltimore Oriole. The Baltimore Oriole is one of the most brilliantly colored songbirds, flaming orange and black, sharing the heraldic colors of the coat of arms of 17th-century Lord Baltimore.

The Baltimore Oriole is the second bird mural we helped facilitate located in Rockford. Other murals include a Yellow-headed Blackbird, Golden-crowned Kinglet, Peregrine Falcon, and Northern Goshawk. We are extremely grateful for the donors that have made these murals possible.

Sinnissippi Audubon was invited to have this mural be part of CRE8IV (pronounced “Creative”), a community-building, arts-infused event. We hosted several events during the two days that Brett was painting. In additional to the Baltimore Oriole mural, artist Yulia Avgustinovich completed a mural also featuring birds identified in National Audubon’s climate change report, including a Sandhill Crane, Peregrine Falcon, American Redstart, and Tree Swallow.

The Audubon Mural Project originated in NYC, but is being brought to Rockford by Sinnissippi Audubon in collaboration with Gitler & ___.  In 2016, the Mile of Murals in Chicago also collaborated with the Harlem-based gallery to paint a mural featuring birds identified in Audubon’s birds and climate change report.

Climate change is one of the most critical challenges facing our world and the artistic movement to confront climate change has steadily gained momentum. Art can serve as a powerful tool to increase awareness and beautify our city!

Justin mural artist living in Rochester. His works are branded under Aerosol Kingdom, which aptly describes his love of using aerosol paint to depict the animal kingdom in urban environments. Suarez’s finely detailed outdoor murals are mainly created freehand with spray paint and can be found all over Rochester, other U.S. cities and abroad.

The two main portions of this mural are designed to tell a story, reflecting on the relationships between predatory and prey species, and highlighting local wildlife which have been suffering from the effects of climate change, including Blackburnian Warbler, Canada Warbler, Cerulean Warbler, Henslow’s Sparrow, Hermit Thrush, House Finch, Scarlet Tanager, Tennessee Warbler, and Veery.

“Dodge” features a depiction of a Peregrine Falcon diving into a group of songbirds, in a failed attempt to snatch one of them within it’s powerful talons. While the tenacious falcon greatly overpowers them; the songbirds are fast, and adept at scattering and escaping with their lives.

“Chase” shows a very converse scene, in which the songbirds have joined together to chase the falcon away from the area that they call home. Though tiny and frail, their many beaks together can cause enough of an annoyance to force the falcon to search elsewhere for food.

Depending on how these two murals are viewed, they can tell their own stand alone story, or they can be viewed as a peice of sequential art. In this way, “Chase” can be seen as the second act of the story, in which the songbirds are retaliating against the falcon.

Justin completed this second mural while his was in Rockford in 2021.

Brett is a self-taught American artist living and working in Northern Illinois. His art is inspired by a mix of vintage and modern advertising as well as American history. Upon moving to Chicago in 2000, he began collecting otherwise discarded materials from alleyways. He applies his imagery to the found objects juxtaposing old and new. The end result of his work tends to have a strong modern feel contrasted with a rustic warmth.

Rockford Lincoln Middle School students painted a mural on the wall behind the Revell Avenue Strong House! They chose the Golden-crowned kinglet as the bird they wanted to feature on their mural.

Thanks to their teacher, Mrs. Jillian Myers, the United Way of Rock River Valley, and SwedishAmerican for collaborating on this mural.

Therese Rowinski is a free-lance artist and muralist who works in acrylics, oils and watercolors.  Her murals can be found in residential homes, businesses and restaurants.  Sinnissippi Audubon approached Therese as she was planning this mural and offered to cover the cost of her paint, if she “put a bird on it.” We’re so happy she was willing to add the beautiful Yellow-headed blackbird.